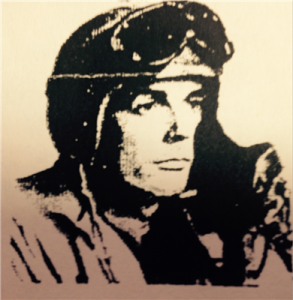 Born 1923 as John James Hoye at Winegar, Wisconsin to George and Eleanor Hoye, with one sister, Eleanor Elizabeth born 1917. Family moved to Idaho in 1934. Graduation from high school at Winchester, Idaho. Volunteered for Army Air Corps March 1941. Entered Flying School as an aviation student in December 1941, graduating under the Enlisted Pilot Program as a staff sergeant pilot during June 1942. Flew combat as a pilot in Troop Canier Command during the African, Sicilian, and Italian campaigns during 1942-43. While carrying paratroopers was shot down in flames and wounded in combat. Married wife Bette April 9, 1944 at Long Beach California while serving as pilot in the Ferrying Command. Daughter Connie Diane (names after her uncle, Lt. George C.(Connie) Connealy, was born June 4, 1945. Left military service in July, 1946 for commercial flying career. Recalled during the Korean War to fly F-86 sabre jet fighters in England and Korea 1951-53. Electing civilian life again after Korea, son James Edwin was born on March 25, 1954 in Seattle, Washington. After employment as a commercial pilot was again recalled to active duty in March 1957 as a jet fighter pilot ferrying aircraft across the Atlantic to NATO nations. Volunteered for B-47 jet bombers in 1958, with added duty in Flying Safety and as Director of Safety in Idaho and Montana. Volunteered for Viet Nam about August 1966 and served as Helicopter Rescue pilot and Unit Commander at Ubon, Thailand and Da Nang, RVN until shot down and wounded by ground fire on May 9, 1967. After hospitalization and convalescence commanded a Missile Support Helicopter Unit in Wyoming until retirement as a Lieutenant Colonel on August 31, 1969.  Flying hours civil and military total over 13,000 utilizing over 80 different types of aircraft.